The topmost telecom giant from Japan, Sony Corporation, is launching a new device from its brand and as per the market expert, the device is nothing less than a stunning one. The launch of Sony Xperia E5 is scheduled on 20th May. With the information circulated in the smartphone market, the experts have a huge expectation from this device, and the trade experts also opine about the tough competition among the top brands in coming days.

This much-talked device will have the Android 6.0 version which is also known as Marshmallow. This device will be a single SIM device, and hence the users who love to have a phone with dual SIM may get a little disappointment. It supports GSM network, and the Indian bands of 4G are also supported in addition to 3G as well as 2G. The device is expected to have the weight of around 147 grams with the 144x69x8.2 mm. The features of this design compared to the price are the prime factors that may make the Sony lovers happy. The interface of this device is easy to use and navigate. It will be available in two variants which are White and Graphite Black. 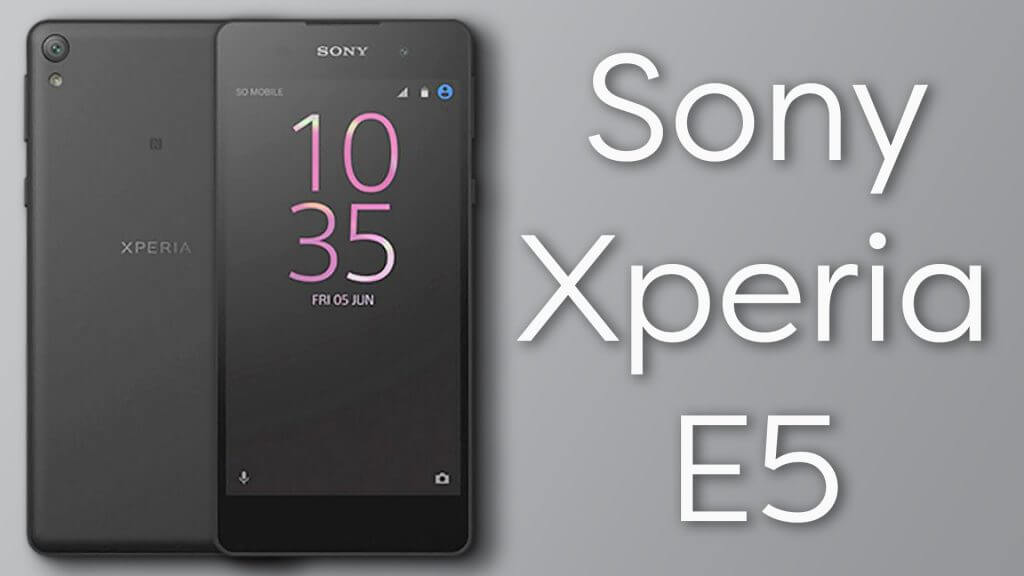 On the front side, there is a camera as well as a proximity sensor and earpiece vent. This can help one to know how the design is created to make it much compact. The Microphone and USB charging port is provided at the bottom on the front side. The 3.5 mm jack for handsfree and secondary microphone are provided on the top. This microphone is much helpful for the noise reduction. The backside of the device is also nothing less than excellent where the primary camera with flash is provided. The LED flash provided here helps to have the images in dull light also. There are volume control buttons and unlock as well as quick camera buttons provided while, on the right-hand side, there is SIM slot for single SIM.

This device is useful to those who love to have a big screen size as it has a screen of 5-inch. The resolution offered by it is 720p HD. It has IPS LCD which is known for sharp images and better view. Obviously, the screen is capacitive and multitouch support. The ratio of body to screen for this device is 69.2% which is standard as per the industry.

When comes to processor, this much-discussed device is obviously too proud on it. It has MediaTek MT6735 as a processor that offers it possesses Cortex A53 chipset with a quad-core processor at 1.3 GHz. If one looks the graphic, also this device can win the race as it has T760 MP2 GPU with 1.5 GB RAM. Those who are interested to know the memory details, this device has 16 GB internal memory, and with the help of MicroSD card, it can be extended up to 256 GB. Hence for the users who love to have movies, songs, images, and videos, this is a perfect device. The architecture of the device is also classic.

When it comes to a smartphone, buyers are obviously much focused on the camera and resolution. Well, this device passes all such tests of the camera as it has 13 MP primary camera which can help one to have PDAF. The LED flash is much helpful to have the pictures in poor light conditions also. The resolution of the image by the primary camera is 4128×3096 pixels. If one is interested to have the videos, does not need to worry as it can record in full HD at 30FPS. The dual shooting options can help one shoot well with continuous shooting mode as well as High dynamic range mode. For the video lovers who love to get real moments at every step, this device can be much useful.

There are obviously many other features present which includes digital zoom, autofocus, and face detection. If the front or secondary camera is considered, it is with 5Mp and without any LED flash. There is no autofocus also, but the result of the camera is really outstanding. The company has loaded this device with a replaceable battery of 2300mAh.

This single SIM device has awesome connectivity options and hence those who want to operate all the facilities from a single number and single device, this can be a right option. It supports the 2G, 3G and 4G networks with Indian bands also. There are Wi-Fi as well as hotspot facilities. It has 802.11,b/g/n, connectivity of Wi-Fi. The mobile hotspot is obviously secured with pass keys. It has Bluetooth v4.1 which can connect other devices as well as Bluetooth speakers. There is also GPS loaded on the device for easy geographical navigation. However, those who want to have the NFC facilities, this device does not hold it, and hence one can consider it as a drawback also.

However, for the song lovers, there is FM radio provided on the device which can easily connect to various FM channels and listen to the music. With the help of 3.5 mm, Jack one can use the FN radio feature. There are accelerometer as well as light sensors and proximity sensors provided on the device which can make one have complete command on different functions. However, there is no fingerprint sensor provided by the company which is something unexpected for the technology and mobile market experts as it is considered as a very common feature these days.

This device falls into the category of medium price range. The Sony Xperia E5 will be in the bracket of 14000 to 15000 INR. Hence, in this segment, as there are some more products from different rivals, the company may have to face tough competition. As the device has got the name of the technology giant, it is expected to do well in the market but to what extent it will succeed that can be replied by the time only.